If you have been searching online for a new Dutch oven then you might have come across something very interesting. It doesn’t come up often, but when it does, it usually perplexes some people. They have heard of Dutch ovens but not usually double Dutch ovens. So what is a double Dutch oven you say?

Well, the term “double Dutch” can be defined in many different ways. It commonly refers to a hard to understand or secret language used by children and derived from the English language.

Of course, the other meaning is the reference to the jump rope game, “double Dutch jump rope”. In this game, 2 separate ropes are used with two rope turners and at least one person that jumps. While these things are neat, we are talking about Dutch ovens. A double Dutch oven usually refers to a Dutch oven that has a lid that doubles as a griddle or skillet, hence the word, “double”.

These are incredibly handy pieces of cookware. When you are cooking in the Dutch oven you can simply cover your meals with the included lid. When not using your Dutch oven you can use the lid to fry eggs, bacon, fish, or just about anything else you desire. So which is the best double Dutch oven to purchase?

Look no further than the Lodge L8DD3 Cast Iron Double Dutch Oven. For another example of a double Dutch oven, you can go to our review of the Lodge 6-Quart L12CO3 Cast Iron Camp Dutch Oven for more information.

The Lodge L8DD3 Dutch oven offers some amazing features as well as being built like a fortress. If you’ve been asking yourself, What Is A Double Dutch Oven?, Then look no further. Its 5-Quart capacity will make short work of any large family meal.

The included deep dome lid allows for a much-improved capacity and as you know, doubles as a 10.25-inch skillet. It has an Electrostatically coated proprietary vegetable oil formula that is cured at very high temperatures for maximum oil penetration, coverage, and surface durability.

This little baby can be used on all types of heat sources including; ceramic, electric, gas, and induction, as well as in the oven at up to 500 degrees Fahrenheit. It can also be used outdoors on the grill or over a campfire.

Its built-in cast iron handles will allow for fast, safe transfer from stove to oven and anywhere in between. Just make sure to pre-season before using out of the box. Even though Lodge pre-seasons all of their cast iron cookware before leaving the factory, you should always re-season before its first and every subsequent use.

You really can’t talk about this products amazing features without mentioning its spectacular price and value. While other double Dutch ovens come in at over $100, the Lodge L8DD3 Cast Iron Double Dutch Oven can currently be found at Amazon.com for under $45.

Now, as you know, prices are always fluctuating and items go in and out of stock regularly. However, at the time of writing this article, you could still get this product at a steal. This product is also one of our best choices for Top 10 Dutch Ovens .

The Lodge L8DD3 Cast Iron Double Dutch Oven not only pulls double duty in the kitchen but its also very easy to clean and maintain. Simply remove leftover food particles with a nylon scraper. Then, wash with hot soapy water. Next, rinse and hand dry.

Finally, once your double Dutch oven is dry, apply multiple coats of a cooking oil of your choice. This will seal your Dutch oven’s cooking surface offering a near nonstick are to cook on. Simply repeat after every meal and washing. With that said, if kept care of, this double Dutch oven will last for decades to come.

Who is the Lodge L8DD3 Cast Iron Double Dutch Oven For?

As you are probably already aware of, the Lodge L8DD3 Cast Iron Double Dutch Oven is a high-quality Dutch oven that serves dual purposes. Furthermore, the sheer value offered by Lodge with this product is staggering.

However, this double Dutch oven will not be for everyone. Likewise, other options may be best for your kitchen or outdoor cooking area. If you are looking for a replacement for an old and worn down cast iron Dutch oven, this product will be a great choice.

And, if you are a big fan of using your Dutch oven outdoors then this product definitely will be of great value. On the other hand, if you do not like the regular maintenance and seasoning that comes with cast iron cookware, you may want to steer clear.

Finally, at only 5-quarts in capacity, the Lodge L8DD3 Cast Iron Double Dutch Oven may be too small for larger families. Furthermore, you’ll need to make multiple batches of meals to equal the capacity of a larger piece of cookware. 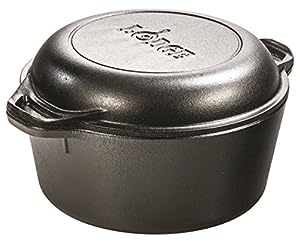 What Is A Double Dutch Oven Conclusion:

As you can plainly see, this product is constructed with care and pride from the Lodge Cast Iron Company. They are also one of only a handful of manufacturers that produce a double Dutch oven.

Since they were one of the first companies to do so, they have nearly perfected the art of form as well as function. You really don’t have to choose between the two. Plus, you don’t have to decide on whether to buy a cast iron Dutch oven or a cast iron skillet.

With this product, you get both at an unbeatable price. Well, that is really all there is to say. We can’t thank you enough for taking time out of your busy life to view our article. We hope this information answers the question, what is a double Dutch oven?

If you like, you can check out our full review of the Lodge L8DD3 Cast Iron Double Dutch Oven. Thank you again for your support and we hope to see you again soon. Take care!